As one of the contenders for becoming the new EU office for financial institutions in the wake of Brexit, the Netherlands - and especially its capital Amsterdam - have good testimonials in terms of international education, infrastructure, English proficiency and general quality of life.

When considering a location for a new EU office, an important factor might be the Dutch 20% bonus cap which applies to the financial sector. It is certainly the most stringent bonus cap in the EU. Not only has the Dutch government lowered the EU bonus cap of 100% of fixed pay (and 200% with shareholder approval) to 20% of fixed pay nationally, the bonus cap has also been extended from banks to the entire financial sector (insurers, e-money institutions, PSPs, etc.) and from 'identified staff' to all personnel.

Recently, Dutch policy makers have tended to play down the rigidness of the 20% bonus cap by claiming that it does not apply to UK banks moving to the Netherlands. However, this is not the full story. Although there are exceptions to the 20% cap for UK financial institutions seeking to obtain a Dutch licence as a bank, insurer or other kind of financial institution, the conditions to these exceptions are rather strict and will not provide relief in all circumstances. It is time for a closer look. 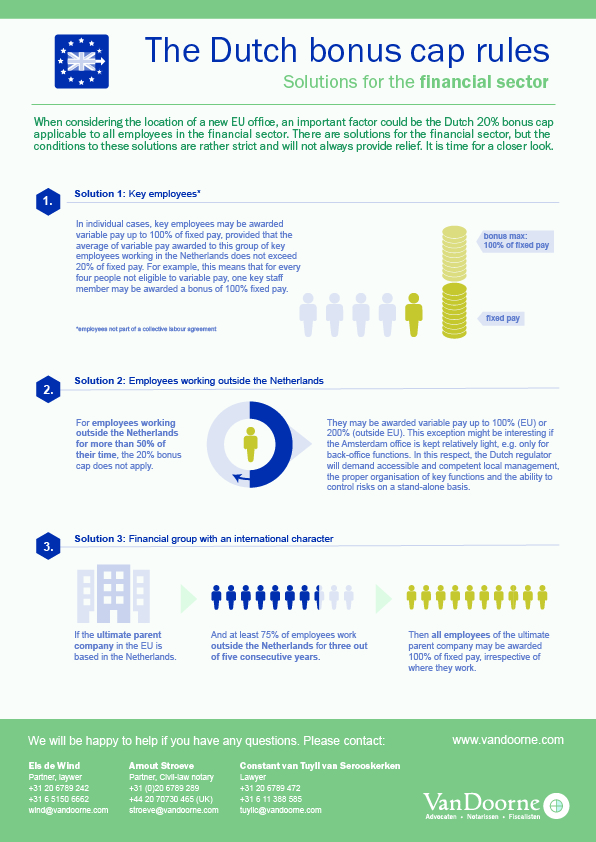